This is the blog home of #kidlitart, a live Twitter chat Thursdays at 9:00 pm Eastern, for children's book illustrators, picture book authors, author/illustrators and friends. Check back weekly to read transcripts, comment on previous chats and suggest topics for upcoming chats.

I know that this is listed as step four, but storyboarding is something that I like to jump into as soon as possible. When creating a picture book, It's important not to compartmentalize the text from the illustrations, and the storyboard environment allows for both to happen at once.

Before you start, in order to draw your thumbnails proportionally, It's helpful to have a rough idea of your book's trim size. It's ok if you don't have the exact measurements, but at least decide on either a portrait or landscape orientation. (Note: If it's an illustration-only assignment, then it's common for the job to land on your desk with predetermined dimensions.)

Try not to get stuck on your less sure, 'in between' scenes:
Most of the time, we aren't lucky enough to have our books floating in our heads, fully formed, but we usually have a good grasp of the key scenes - jot those scenes down and worry about the others later. In my book, The Gentleman Bug, I knew exactly how I wanted the ending to look, but I was less sure about the rest, so I developed it from back to front.

Digitizing the storyboard process can save a lot of time:
Adobe Illustrator's multi art-board tool is amazing for this. With it, you can quickly arrange 32 squares and begin placing your text and illustrations, all while having the ability to zoom in and out, and print your roughs at actual size.

Abstract your scenes:
This is helpful at almost every stage of your picture book's development. Whether you're just starting to arrange the text and illustrations, or you're farther along, simple shapes are a great way to asses the flow of your book.

This is an example from The Little Matador, where I used basic shapes to quickly capture the placement of the main characters. Doing this, makes the pacing very clear, and It's great for catching problems of scale - like having too many back-to-back close-ups of your main character, or not enough. Again, working digitally is a time-saver here.

Think of your thumbnail storyboards as an information map:
Use arrows to connect a cause on one page with it's effect on another, highlight the climax pages in bold red, do whatever it takes to help get a deep understanding of what needs to happen in order to make your picture book work.

Finally, try not to get too precious about anything. Stay messy, avoid attachment, and approach your thumbnail storyboards with the knowledge that anything you fall in love with could be axed later on. :)

Bio:
Julian Hector is one of the youngest author/illustrators working in children’s publishing today. Five years ago, he was plucked out of college by an editor at Disney-Hyperion, and he’s been writing and illustrating children’s book ever since. His most recent book is C.R. Mudgeon, written by Leslie Muir, and you can visit his website here: www.Julianhector.com.
Posted by Anonymous at 10:07 AM 8 comments:

The next two weeks will be devoted to tiny sketches of your proposed layouts.

This is an important step. The purpose of the storyboard is to view the entire sequence of pages at once in order to judge the flow. That's why we call them thumbnail storyboards--ideally, they should fit on one page. You can see at a glance how the scenes are distributed, the balance of spreads vs. single pages, the movement of the action, and how the focus shifts from one scene to the next.

You will notice passages where there's not much happening--no real need for a change of scene . . . or passages where too much is crowded into one scene. You will probably need to go back and adjust your manuscript--that's the point of this stage: seeing how the text and art play off each other.

Now is a good time to brush up on the basics of how a (printed) picture book is put together. One of the best breakdowns is provided by our friend Tara Lazar in this popular post. And here is a storyboard tutorial from an acknowledged master, Uri Shulevitz.

Once you understand the space you have to work with, you can create your own template, scaled down proportionately from the finished page size you have chosen.

Start simply: a circle to indicate action contained on one page and an arrow to show action continuing across the spread. Maybe jot notes to yourself: bird's eye view, character close-up, etc. Gradually refine these scribbles and notes until even someone who doesn't know the story is able to "read" the action.

I don't know about you, but this is the stage when it hits me: I'm working on a BOOK, by golly!

TOPIC: From blank page to finished image. What path do you take to get there? #kidlitart 2-23-12
Posted by BonnieA at 10:12 PM No comments:

Email ThisBlogThis!Share to TwitterShare to FacebookShare to Pinterest
Labels: process

TOPIC: What's your go-to tip for getting to know your characters? #kidlitart 2-16-12
Posted by BonnieA at 10:10 PM No comments: 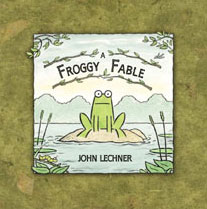 Characters are at the heart of any story. If readers cannot connect with your characters, they won't care about the story, no matter how creative or exciting it is.

In a novel, the author can spend pages and pages describing a character's personality, background, motivations, hopes and dreams. In a picture book, words are few and precious, so the pictures need to do a lot of the work, showing both the visible and invisible.

That's not to say your character should be an open book. A character can have secret thoughts and hopes and dreams, but you the artist should know what they are. You should know everything about your character. This is difficult when you are not the author, but as illustrator you are co-creator of the characters and can impart your own ideas and personality into them.

Your art style will have a huge effect on your character design, whether your work is realistic, cartoonish, painterly, etc. But try to consider them as separate problems. Even within the realm of your style, there are hundreds of variations on whether a character is tall, short, has a big head or pointy chin or beady eyes.

The good news and the bad news is that there are no "rules" about what makes a visually appealing character. We know it when we see it. And even when you've been doing it a while, it's still hard work. But here are a few tips for designing great picture book characters.

1. Keep an open mind, don't rely on the kind of characters you always draw. Think of how you can push your characters further.

2. Consider the internal and external aspects of a character, which don't necessarily need to match. You might have a beautiful villain or an ugly hero, as long as they fit the story.

3. Simplify. Look for simple shapes and lines that can lend an abstract elegance to your characters.

4. Think about what physical actions the character needs to do – run? Jump? Sit in one place? Just as a cheetah and a hummingbird are built for what they need to do, so can your character be designed for a purpose.

5. Make a LOT of drawings of your characters, in all kinds of poses. Each time you draw them, you'll have a stronger understanding of their physical structure and they will become stronger.

6. Try giving your character some unique feature or trait or piece of clothing, so he or she will stand out from the crowd.

8. Try drawing in a different medium than usual, to give your brain a different outlook on the character. Even if you won't be illustrating the book that way, it might give you a visual idea that you wouldn't have thought of.

9. Look at real people and animals for inspiration, not only for visual appearance but for how they move.

10. Trust your instincts and listen to your characters – when they become alive in your mind, you'll know how to draw them.

Good luck and have fun! 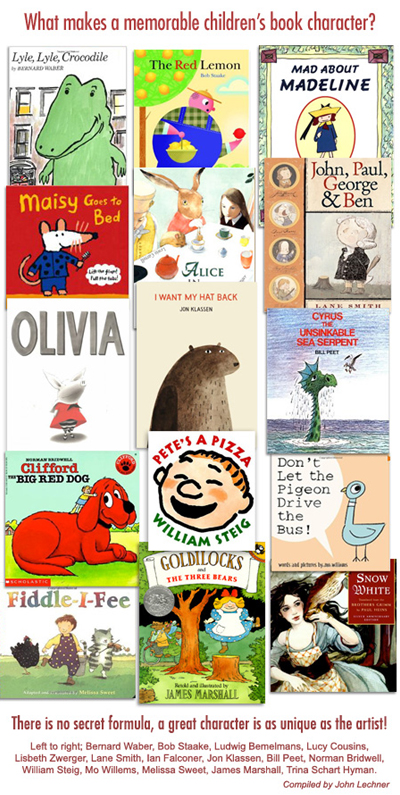 John is the author of four books for children: A Froggy Fable, Sticky Burr: Adventures in Burrwood Forest, The Clever Stick, and Sticky Burr: The Prickly Peril. By day, he designs games, websites, software and animated films for children's media company FableVision. Check out his blog for updates on John's online comic strip, films, puppet design and other projects.

Here we are at Step 3! It's time to give your characters a little face time. You may have been creating character studies all along--that's great. Although we've divided the challenge up into steps so we can discuss different stages more easily, putting a story together is a fluid process. Wherever you are in your story, what we'd like to encourage you to do in the next two weeks is to let go of the responsibilities of plot, message and theme, and really focus on your characters visually.

Your goal is to become thoroughly familiar with expressions, clothes, and body language. The more specific you can be about your characters, the more opportunity you offer your reader (or viewer/listener) to identify with them. Research details of clothing, fur, feathers or scales. Pick out defining features to emphasize. And don't neglect secondary characters: no one in your book should be generic. Supporting characters say a lot about the main characters, indirectly, and can even generate visual subplots of their own.

Last year, we pointed out that cartoonists are masters of character development, and gave you some references you might find useful, whatever your style. These books/links are listed again, below. 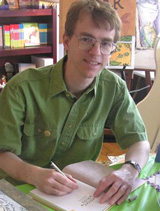 But this year we have a special treat--tune into the blog on Wednesday (February 15), for a guest post from the multi-talented writer/illustrator/animator/musician/ puppeteer/swell guy John Lechner, whose thoroughly believable and engaging characters include a parasitic seed pod and a clever stick. He's mastered the art of drawing a reader in to the most unlikely situations: I defy you to dip into any of the online adventures of Sticky Burr and NOT end up caring about the little fellow and all his friends in Burrwood Forest.

John's wit and humor shine through his characters. He'll be here to share the importance of getting to know yours better before you send them out into the world.

Happy sketching, everyone--and be sure to join us at #kidlitart on Thursday, February 16, for a #PBDummy chat to discuss John's tips and update fellow dummiers on your progress!

The Art of Animal Character Design, by David Colman

Character Design: a blog devoted to interviews with character designers

*Please feel free to share your own favorite go-to resources in the comments section.
Posted by BonnieA at 10:09 AM 1 comment:

TOPIC: What are your fav non-#kidlit sources of information and inspiration? #kidlitart 2-9-12
Posted by BonnieA at 10:11 PM No comments:

TOPIC: What was your all time best conference tip? #kidlitart 2-2-12
Posted by BonnieA at 10:11 PM No comments:

Have a #kidlitart Question?